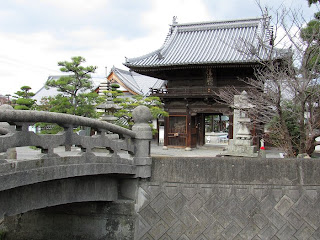 Approaching the main gate of Sairin-ji Temple dating from the mid-eighth century. The name can be translated into English as "West Forest Temple." 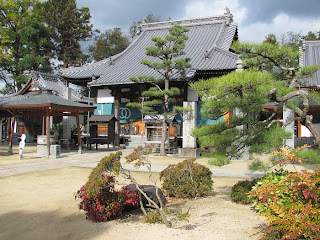 The main hall at Sairin-ji. The bodhisattva (bosatsu) enshrined within is the eleven-faced Juichimen Kannon Bosatsu, a manifestation of Kannon, the bodhisattva of compassion. The statue of the bodhisattva was placed facing to the rear of the hall, so many pilgrims proceed to the back of the main hall to offer prayers. (In the Mahayana Buddhist tradition, a bodhisattva is a being on the path to enlightenment who is pledged to work for the enlightenment of all sentient beings.) 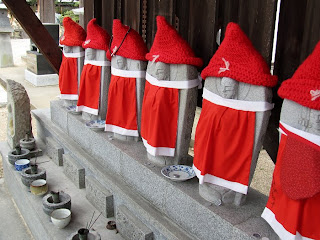 Roku Jizō statues at Sairin-ji. Jizō is another bodhisattva and the only one portrayed as a monk. The Jizō bosatsu is beloved in Japan as the patron of children, expectant mothers, firefighters, pilgrims and travelers. Roku Jizō, meaning "six Jizō," represent the Buddhist six realms of existence. Red caps and bibs traditionally cloak statues of Jizō symbolizing among other things health and fertility. 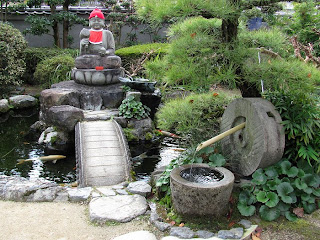